Why are foreign companies choosing to do business in uruguay?

As founding member of Mercosul and for the last decade its political and economic stability has attracted the attention of foreign investors seeking to incorporate a company and do business in Uruguay.

In Uruguay, foreign direct investment (FDI) has reached record levels, making the country one of the top receivers of FDI, in terms of GDP in South America. This growth in foreign investment is associated to its attractive free zones, free trade agreements, as well as its participation in Mercosur, ALADI and other regional blocks.

The country has a pro-investment policy that eliminates restrictions on the use of foreign capital, allowing for free movement of capital and bank secrecy.

In September 2019, the creation of a new legal entity, a Sociedad Anónima Simplificada, or SAS, sought to boost business in Uruguay. This new structure minimizes the costs of incorporation, streamlines the process of creating companies in Uruguay by promoting the use of digital platforms in all phases of the process, and allows companies already incorporated in the country to transform their legal entity to a SAS. 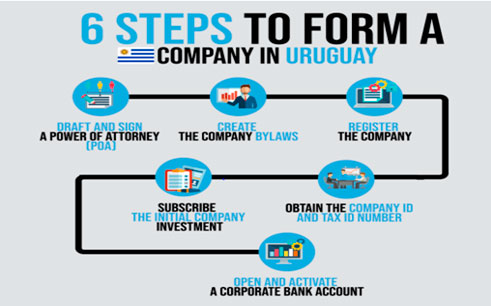 Laws that promote business in Uruguay

The Uruguayan government is constantly working on creating new incentives to encourage investment in the country through a series of laws and reforms. Here are some of the most important laws to in keep in mind while doing business in Uruguay:

Law for the Protection and Promotion of National and Foreign Investments

Some of the most attractive tax incentives for companies doing business in Uruguay are:

The Special Regime of Free Economic Zones has as its main objective to promote investments, generate employment, promote activities with high technological content and innovation, and favor the country’s insertion in the dynamics of international trade of goods and services, among others.

Uruguay currently has 11 free economic zones, most of them located in the metropolitan area, Montevideo. The companies that settle in these zones of Uruguay have an almost absolute tax exemption, with the only exception of the contribution of social security to their workers.

Goods, services, merchandise and raw materials can be imported and exported to and from the free economic zones exempt from any tax. Additionally, the business creation processes within these zones in Uruguay only take 9 weeks.

Compared to other free economic zones in the world, this is a highly competitive duration of time for the formation of a company. This allows you to more quickly start doing business in Uruguay.

There are several specialized and suitable zones offering the latest technology and the greatest ease for the provision of your services.

Some of the best known are:

Foreign business and investment in the technology sector

Uruguay became the first country in Latin America to launch 5G technology, thus advancing its infrastructure for doing business in the country.

Uruguay’s modern technological infrastructure and skilled labor position it as a technological leader in Latin America. This has attracted many companies in the technology sector to do business in Uruguay.

One of the best examples of foreign multinational interest in the country is Google, who in 2019 announced its installation in the country with the construction of its data center in the Science Park free economic zone.

In April 2019, Uruguay became the first country in Latin America to launch 5G technology in its territory.

The implementation of this technology is crucial for the development of artificial intelligence and big data management. In this sense, it is notable that Uruguay is taking the initiative for its implementation.

Technology companies interested in doing business in Uruguay and using the country as a platform for its global expansion can take advantage of the following factors:

Depending on the activities carried out by technology companies, they are now eligible for certain additional tax exemptions supporting their growth, attracting new companies to invest and do business in Uruguay.